Thoughts on a Fat Guy in Spandex 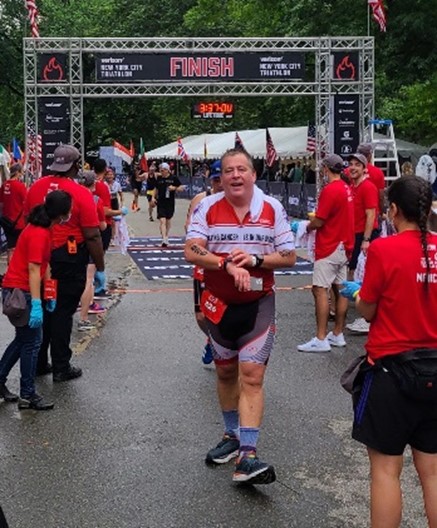 My article, “What’s up with Peter Shankman?” was published this month in PR Daily. There’s lots of good marketing advice in the article that will pop up in future blogs. But before we get into the business side of Peter, I want you to see his personal side.

Most of us in PR know Peter Shankman as the founder of HARO (Help a Reporter Out) or as the author of “Faster Than Normal” and “Zombie Loyalists.” Many of us have heard him deliver inspiring keynotes at industry conferences. But few of us know him as a motivated athlete.

“I raced the Cozumel Ironman in 2010, finished, swore I’d never do another. Then in 2014, I raced the Louisville Ironman, didn’t finish, woke up in an ambulance, and totally swore that I’d never do one again,” he says.

Last week, Peter blogged about what he learned competing in the NYC Triathlon 2021. He’s training for the Ironman World Championships in Kona in October. That competition starts with a 2.4-mile swim, followed by a 112-mile bike ride and a 26.2-mile marathon run on an active volcano with average temperatures in the high 90s. It’s insanely difficult, but so is fighting cancer. And that’s why he’s doing it – to raise money to help beat cancer.

On race days, Peter wears spandex because he knows he’s going to be out in the sun for a long time, sweating and dumping water on his head. As he crossed the finish line in NYC, his coach snapped a photo of him.

“If you know anything about me, you know that spandex and I are NOT friends. I don’t have the kind of body that screams ‘let’s wear something totally clingy that highlights every single slice of pizza I’ve eaten since I was seven years old! Who wants to see a photo of this fat, sweaty, soaking wet guy walking towards them?” he asks

But when Peter noticed the “FINISH” banner in the photo, he saw himself as someone who had spent the past 15 months training for the Ironman. He says he knows the buff athlete in the photo isn’t there all the time; he disappears on occasion, forcing him to hang out with the fat guy who’s full of imposter syndrome.

“Maybe we all can start seeing ourselves like other see us – as someone doing their best every single day to try to improve. As someone who occasionally has setbacks but tries to use them to come out stronger on the other side. Maybe, just maybe, we can look at ourselves today and treat ourselves with just a little more kindness,” he says. All of us at C3PR donate time to our community and support clients and fellow professionals like Peter who do the same. I especially admire him for his positivity and willingness to help others. His Leukemia & Lymphoma Society Team in Training has raised $57,000 towards his goal of $125,000. He asks if you would be so kind to donate a few dollars in honor of those in his family with blood cancers that he’s lost, and those who are fighting it every day.